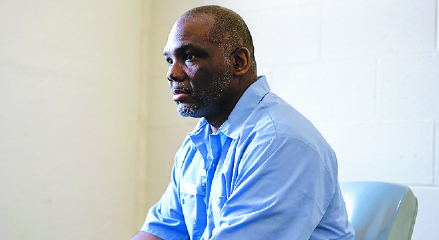 by Jordan Andrews for The Maine Monitor


Convicts claiming innocence in Maine face nearly insurmountable procedural hurdles to having new evidence heard in court, but a recent order has made it a little easier.

Maine Superior Court Justice Thomas McKeon ordered a hearing for Foster Bates, a Maine State Prison inmate, ruling that his substantial claim of innocence allows him to present evidence that has been procedurally barred from consideration.

Bates, who is serving a life sentence for rape and murder, has been trying to have a court consider statements from new witnesses who came forward in 2014 and 2016, one saying another man confessed on the night of the murder and another with a new account of that night.

But Bates has been hitting roadblocks.

Trying to incorporate the new witness statements into a DNA appeal did not work because Maine courts have interpreted DNA-based appeals laws to mean that only evidence related to DNA is admissible.

And Maine has a statutory one-year deadline on bringing forward new evidence, counted from when the facts “could have been discovered through the exercise of due diligence.” Even if the petitions are filed within a year of finding the evidence, judges often dismiss them, determining that the “new” evidence could have been found earlier.

Until now, Bates has not been able to get a judge to consider how the new witness statements impact the state’s case against him.

McKeon’s Oct. 18 order applies an “actual innocence gateway” established by the U.S. Supreme Court to Maine’s postconviction review process. Through it, those with compelling evidence of innocence may bypass time limits and reintroduce evidence that had been dismissed for procedural reasons.

“Technically, what we have is an opportunity to present this procedural actual innocence claim,” said Rory McNamara, one of Bates’s attorneys. “What’s interesting about that and what’s exciting about that is that, OK, not only can he get into court, where he otherwise couldn’t have, but the nature of that hearing will allow him to present evidence that is not just relevant procedurally.”

McNamara said Bates will present the exact same evidence to support his procedural claim as he would to support his more substantive claim of innocence, and the judge will consider that evidence in separate inquiries.

First, McKeon will determine if it meets the slightly lower standard to excuse the lateness in filing and, if so, would next consider if the claim is enough to warrant relief, such as release from prison and reversal of the conviction.

Ruling does what legislation has not By applying the innocence gateway in Maine, McKeon’s order accomplishes in a limited way what recent attempts at legislative reform have failed to achieve.

Proposed “actual innocence” bills, which would offer a path to a hearing for those claiming innocence outside the limitations of the current post-conviction review statutes, have been unsuccessful in Maine. While a bill to eliminate deadlines for filing newly discovered evidence petitions (LD 54) has passed the Legislature, it faces a possible veto from Gov. Janet Mills, who as attorney general opposed actual innocence bills.

“I’m proud of McKeon, I really am,” said Rep. Jeff Evangelos (I-Friendship), who sponsored LD 54. “I’m so proud of what he did here. It’s a groundbreaking decision but, at the same time, I have so much anger.

“Any state or nation that would willfully keep a person in a cage, using procedural maneuvers like ‘time limits’ and ‘due diligence’ to block hearing evidence that could result in freedom for an innocent person, is the definition of tyranny.”

While not taking a position on Bates’s guilt or innocence, Evangelos said he stands for Bates’s right to have his evidence heard.

Opponents to Evangelos’s bill argued that removing the time limits and due diligence hurdle would burden the courts.

Some legal officials say lifting the time limit could cause a 5% to 10% increase in post-conviction review cases per year. Legislators attached a $1.7 million fiscal note to the bill.

Assistant Attorney General Donald Macomber testified at the legislative Judiciary Committee’s hearings and work sessions and opposed the retroactive nature of the bill that would allow inmates to file new petitions about evidence that had been dismissed for missing the time limit.

McKeon initially dismissed Bates’s actual innocence claim in a June order because state law provides that the post-conviction review statute is the “exclusive” means of reviewing criminal judgments, and the courts have interpreted that it does not allow for “freestanding claims of actual innocence.”

In that 2013 decision, written by the late Justice Ruth Bader Ginsburg, the court was considering a late federal habeas corpus petition and asked: “Can the time bar be overcome by a convincing showing that she committed no crime?” The ruling held that “actual innocence, if proved, serves as a gateway through which a petitioner may pass whether the impedimentis a proceduralbar…(or) expiration of the statute of limitations.”

Opponents say removing time limits or creating a new path to a hearing could create a flood of new litigation and would harm victims of crime. They say each time a conviction is revisited, it reopens old wounds.

The Maine Supreme Court wrote in a past decision that “the need for finality and for the preservation of the integrity of criminal judgments causes us to regard a motion for a new tri alon the ground of newly discovered evidence with disfavor.”

Ginsburgad dressed concerns about burdening the courts and disturbing victims of crimes. She said the gateway would apply only inrarecases because the evidence of innocence must meet a highstandard: The judge must determine that it is probable that with the evidence presented, no reasonable juror would have found the petitioner guilty beyond a reasonable doubt. And she laid out several Supreme Court decisions that make exceptions to time limits for those with substantial claims of innocence.

“These decisions seek to balance the societal interests in finality, comity, and conservation of scarce judicial resources with the individual interest in justice that arises in the extraordinary case,” she wrote.

New witness statements Bates’s may be one of those extraordinary cases.

His conviction was based on DNA testing that matched him to semen collected from the body of Tammy Dickson, who was found bound, gagged and strangled to death in her South Portland apartment in 1994. He maintained his innocence, claiming he and Dickson were having an affair but he did not rape or murder her.

In 2014, when Bates was in the process of a DNA appeal based on testing that excluded him as the source of male DNA on the sock found in Dickson’s mouth, a new witness came forward, saying her brother-in-law had confessed to her sister on the night of the murder.

During Bates’s 2016 DNA hearing, another new witness testified that she talked with Dickson after Bates left her apartment that night, and the alleged confessor was drinking at a party across the hall. This, Bates argues, supports his claim that he and Dickson had consensual sex before she was murdered by someone else.

Those witness statements were not considered in the DNA appeal because they were unrelated to DNA, and they were not considered when Bates introduced them in a petition based on newly discovered evidence because it was determined that his lawyer could have found the evidence more than a year before filing the petition.

The hearing called for by McKeon, which has not been scheduled, would determine whether Bates’s evidence meets the gateway threshold, allowing him to present the previously dismissed evidence and have it considered on its merits.

Macomber argued for the state in a motion to dismiss that Bates’s evidence does not meet the innocence gateway’s standard, but “pales in comparison to the overwhelming evidence of Petitioner’s guilt introduced at trial.” He noted that the Maine Supreme Judicial Court has not ruled on whether or how to apply the actual innocence gateway in Maine.

McKeon has not determined whether Bates’s evidence meets the gateway’s high standard. “However,” he wrote, “the court does find that (he) has set forth enough evidence to warrant an evidentiary hearing.” McKeon ordered one where “Bates may present all relevant evidence in support of his actual innocence claim.”

While Bates’s other attorney, Tina Nadeau, is excited about the order, she is not celebrating.

“Foster’s trial and the 18-plus years since his trial have been filled with disappointments and setbacks,” she wrote in an email. “It’s enough to entitle us to a smidge of skepticism. We do see this hearing as Foster’s best chance to put on evidence that would finally establish his innocence and provide the court with the evidentiary basis it needs to vacate his convictions.”

A spokesperson for the Maine Attorney General’s office said the office has no comment on McKeon’s order, except to note that the state is statutorily barred from appealing it, so the hearing will go forward.

This story was originally published by The Maine Monitor.

The Maine Monitor is a local journalism product published by The Maine Center for Public Interest Reporting, a nonpartisan and nonprofit civic news organization.