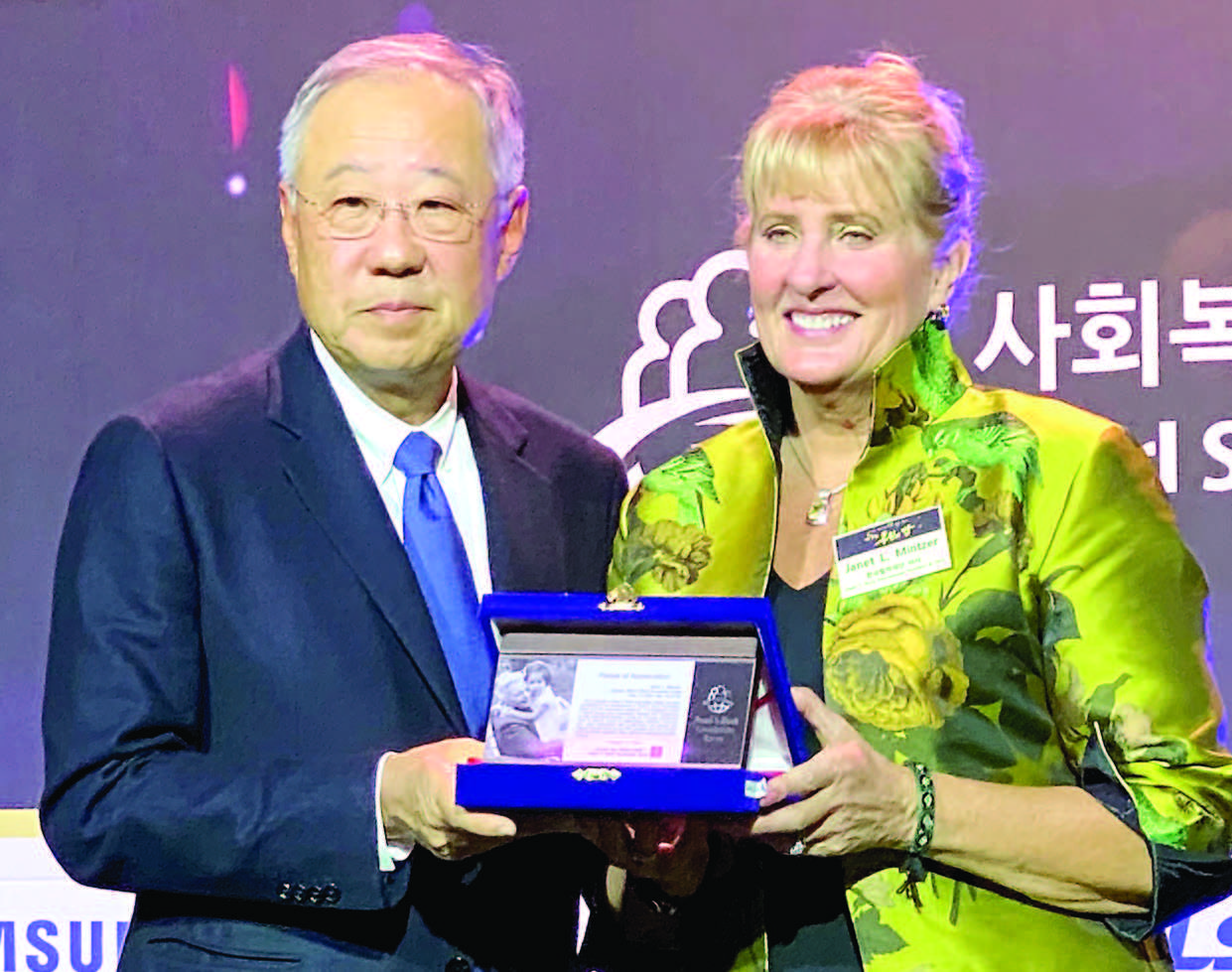 Pearl S. Buck International President and CEO Janet Mintzer receives an award from Jin Roy Ryu, chairman of the board of the Pearl S. Buck Foundation in Korea. Mintzer will retire from PSBI in May after 20 years of service.
PREVIOUS IMAGE


Pearl S. Buck is revered in China today. It wasn’t always so. She was a victim of discrimination during her childhood when her missionary father moved the family there.

Thought to be ugly and teased for her “yellow curls and strange blue eyes” she often sought comfort in the privacy of her mother’s beloved rose garden. Yet it was always her dream to return to that country, a wish she never fulfilled. Today her legacy lives on in her National Historic Landmark Home, Pearl S. Buck International, Perkasie.

“She wanted desperately to it in that world, for she loved the people in it,” said Janet Mintzer, president/ CEO of Pearl S. Buck International (PSBI). “When she returned to the United States in 1934, she took up her pen and used her resources to speak up about the discrimination faced by minorities. She was passionate about bringing people of different backgrounds, races and cultures together in mutual understanding believing this would decrease the pain of hatred against vulnerable children.”

According to Mintzer, Buck’s story is kept alive through child sponsors, students, teachers, volunteers, board members, tourists and those in local and worldwide communities in a concerted effort to “bridge more cultures and change more lives than ever before.”

Mintzer, began work at PSBI as vice president and chief operating officer in 2001. Six months later she was named president/CEO. Her commitment, passion and tireless efforts to the mission have been representative of her trademark of excellence. In May, Mintzer will retire. In her 20th year, she has provided steadfast leadership to advance Pearl Buck’s legacy. She will miss her serene surrounding and duties at PSBI.

“I love to do public speaking about stories from my international travel, life, leadership, social justice, and journey to intercultural competence,” said Mintzer. “I have served as a commencement speaker at Bucks County Community College, received an honorary doctorate in public service and served as keynote speaker at international and local conferences. And, of course, I take every opportunity to talk to community groups about Pearl S.

A native of Philadelphia, Mintzer received her bachelor’s and master’s degrees in social work from Temple University with the intention of making a difference in children’s lives. PSBI was the perfect it.

“When I retire, I will retain the title, ‘emeritus president and CEO’
and plan to continue supporting this institution in every way possible,” she continued. “It has certainly been a great love of my life. When I look back, I can hardly believe I am in my 20th year of service. “ Mintzer will miss her many trips to China, South Korea, Taiwan, Thailand, the Philippines and Vietnam, where she still retains many friendships. She anticipates filling that gap with a focus on her artwork, grandchildren and leisure travel.

She keeps in touch with many friends in China who inform her that schools are still closed there, with other restrictions slowly being removed.

“We are certainly a global world now, all connected in countless ways beyond the economy,” said Mintzer, speaking on the coronavirus, which originated in China.

“The future is so bright for all of us to learn from this situation and work together.”

Mintzer has focused on learning about the ways and habits of other people, much like Buck who believed “we all have a duty to ind out about people, other than our own, so that we have a mutual understanding and can work together for a good and peaceful world.”

As Mintzer prepares to pass the baton to a new leader, The Janet Mintzer Living the Legacy Society is being created to assist the new leader in writing the next chapter in the greatest story Buck is still writing – the mission and programs of Pearl S. Buck International. It will expand access to education for children who face discrimination around the world, provide opportunities for international exchange and inspire people to visit the Pearl S. Buck House, a rare National Historic Landmark dedicated to a woman’s contribution to society, which focuses on issues important during Buck’s lifetime, and more so today.