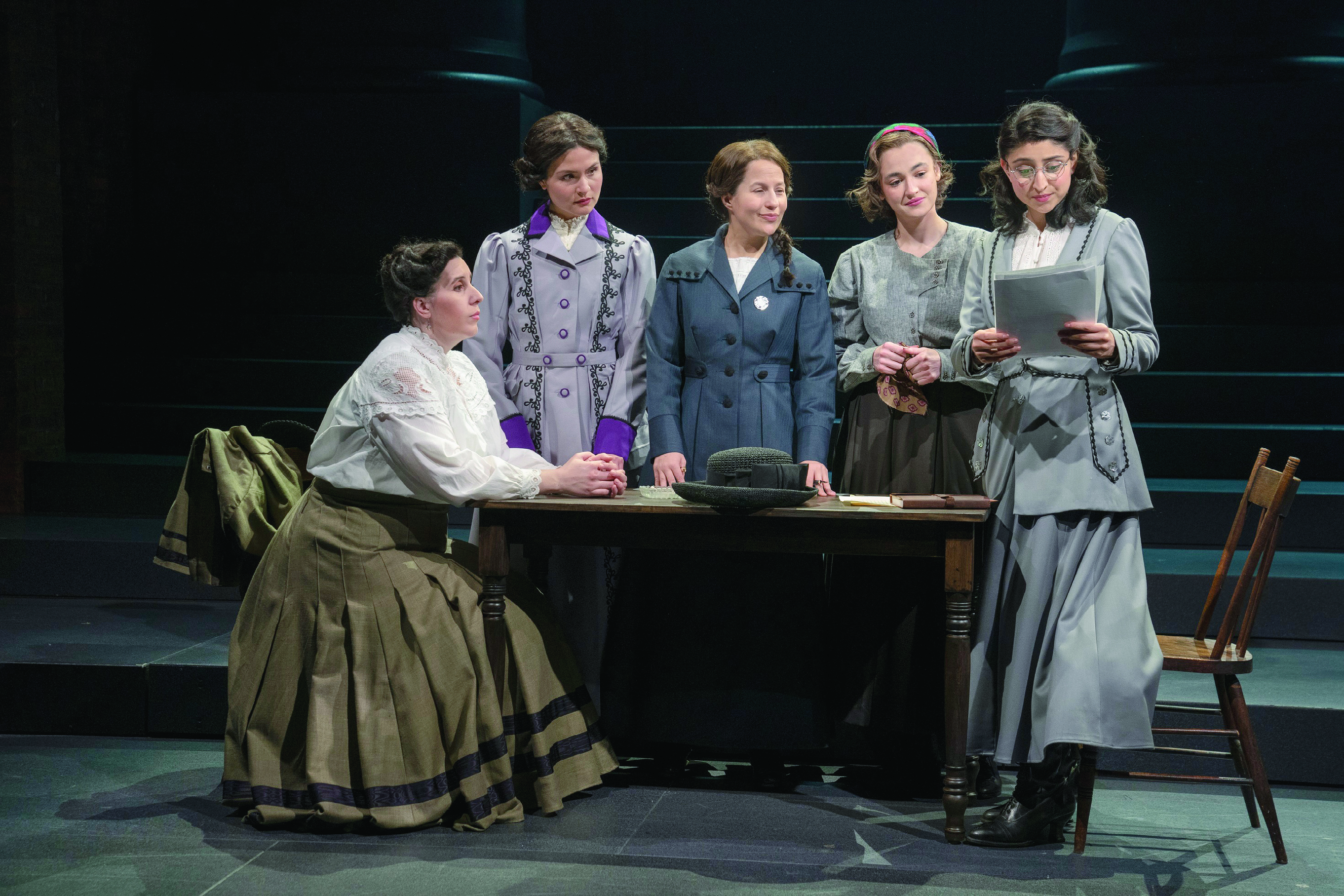 Because of its wide-canvas approach to a slice of American history, its teeming cast of characters, and a star (Shaina Taub, center) who also wrote the book and score, Suffs has often been compared to Lin-Manuel Miranda’s Hamilton. 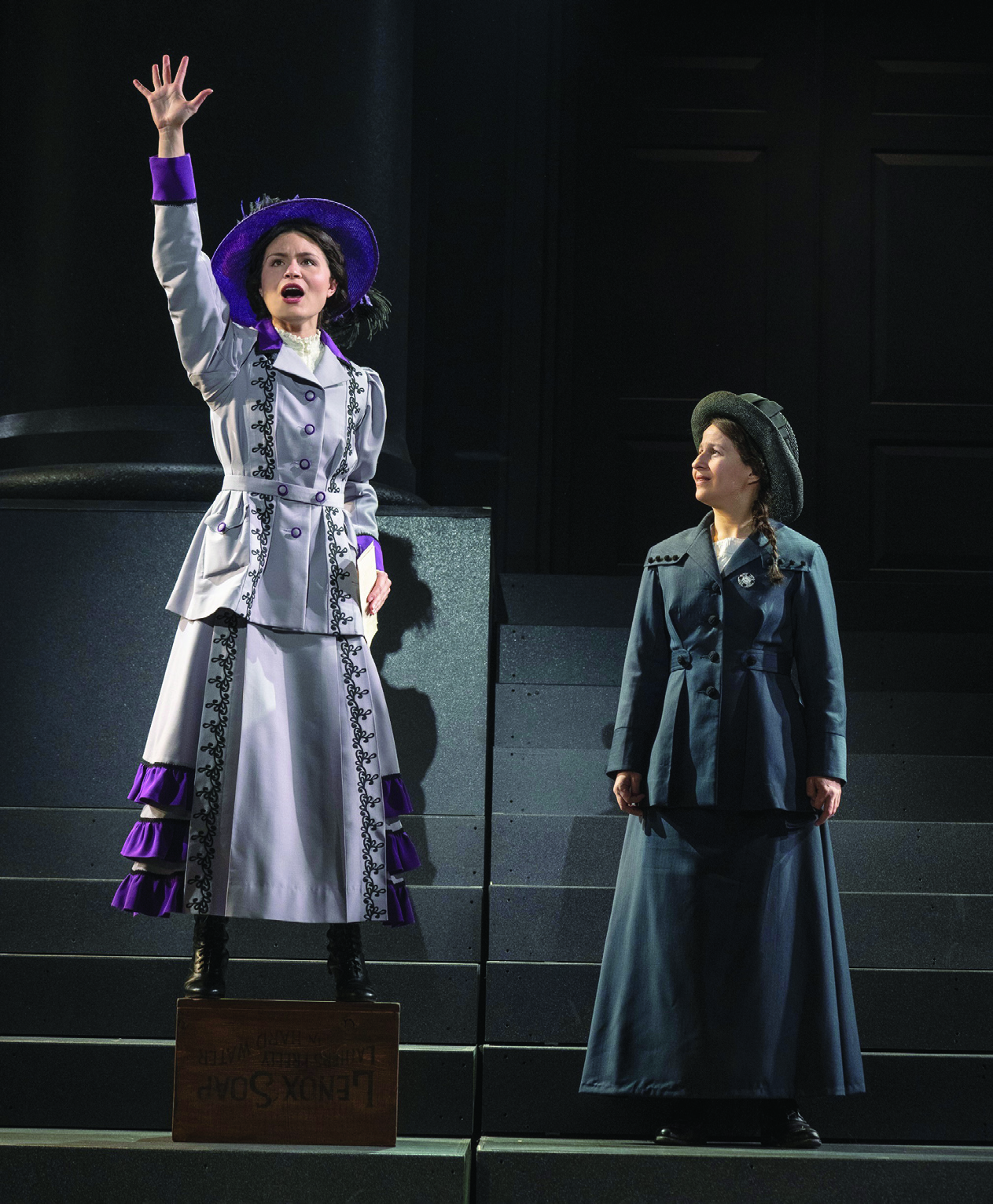 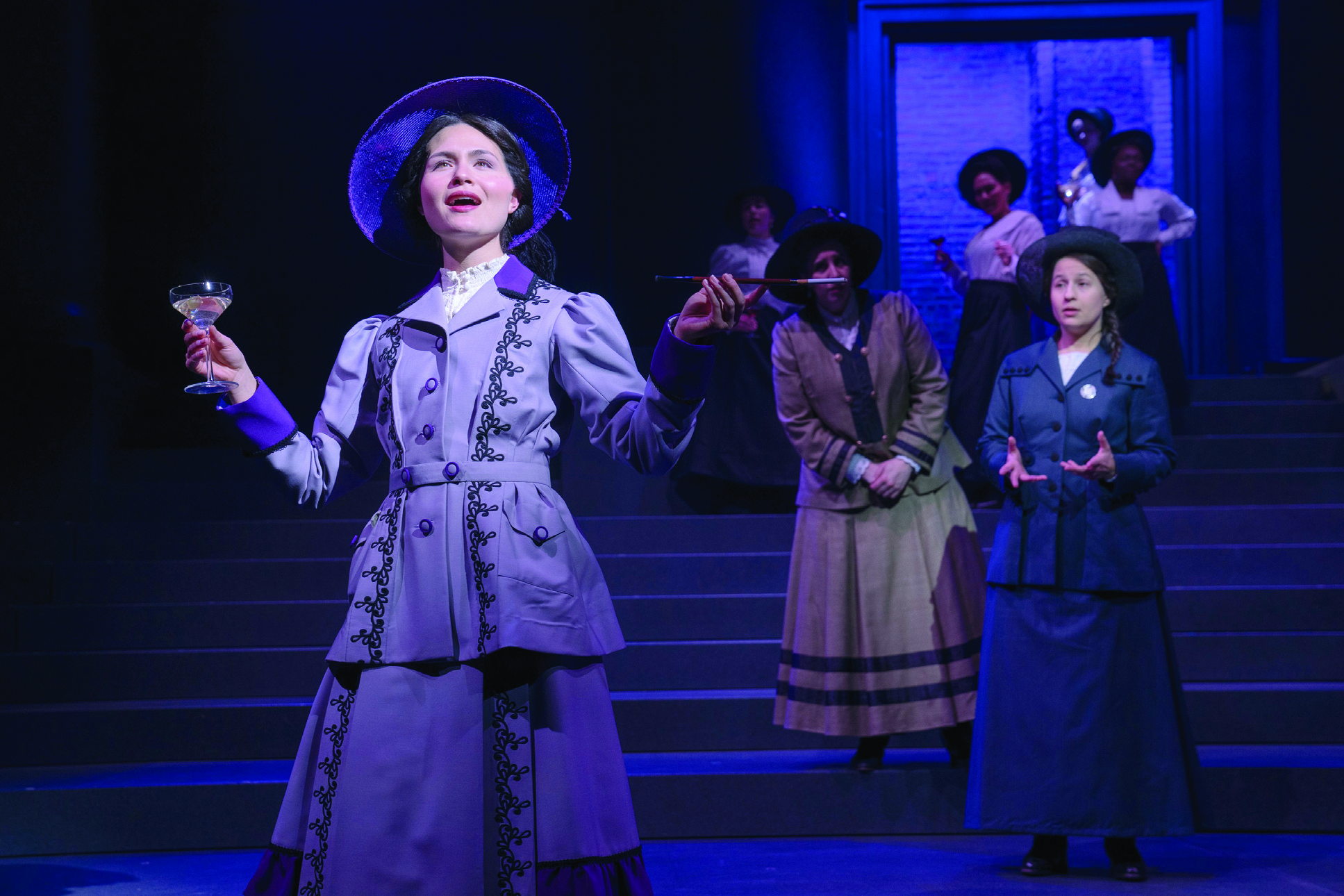 “How will we do it when it’s never been done?/How will we find a way where there isn’t one?” These words, from Suffs, may have a peculiar resonance for Sun Hee Kil, who designed the sound for the new musical in its debut production at New York’s Public Theater this spring. One of the most ambitious shows of the season, it follows the fight for women’s suffrage in the years before and after World War I.

Because of its wide-canvas approach to a slice of American history, its teeming cast of characters, and a star (Shaina Taub) who also wrote the book and score, Suffs has often been compared to Lin-Manuel Miranda’s Hamilton. But Suffs is, in its way, a more challenging proposition.

The central character, Alice Paul, is part of a new wave of feminists who are fed up with the movement’s incremental achievements. As the show begins, it is 1913, and only 11 states have extended suffrage to women.

Developing her own brash, confrontational methods—including organizing a historic march on Washington—Alice risks alienating such accommodationists as Carrie Chapman Catt, who are part of the feminist establishment.

“How do I stand shoulder to shoulder with these ineffective fossils?” she wonders.

Over the course of several years, Alice stakes everything—including the loss of dear friends and a jail sentence—to advance the cause of voting equality. Woven into the narrative are such figures as the Black journalist Ida B. Wells, the activist Mary Church Terrell, Alice’s associate Doris Stevens and her lover Dudley Malone (a member of the Woodrow Wilson administration), the tragic Inez Milholland, socialite Alva Belmont, and the union organizer and actress Ruza Wenclawska.

An intelligible sound design is a must for any show, but in a musical such as Suffs, with its sprawling cast and a book filled with political maneuvering, it was an absolute must.

Working in the Public’s Newman Theater—the same space that gave birth to A Chorus Line, Bring in ‘da Noise, Bring in ‘da Funk, and Hamilton, among others—Kil provided a design of crystal clarity. (Daniel Kluger came onboard to design the sound effects.) The Newman is a storied venue, but an exceedingly odd one, too. It is long and narrow as a railroad flat, with steeply raked audience seating and concrete side walls. Also, the Lexington subway line runs directly under the theatre, resulting in disconcerting rumbles at any performance.

Fortunately, Kil understood the space, having co-designed (with Jessica Paz) the musical The Visitor there in October of last year. She notes, “The sound system was inherited from Brian Ronan,” who was attached to The Visitor when it was originally set to open in March 2020. “Jessica took the lead, and I followed her direction. I listened to the system.”

What she learned by listening was considerable. Because of the room’s length, she notes, “It’s hard to deliver sound from the stage to the back of the room. There’s the subway going on and the air-conditioning system at house left.” That last point is an issue for many sound designers; because of COVID protocols, theatres are running their systems more aggressively, resulting in additional noise.

In assessing the challenges of the Newman, Kil says that for Suffs, “I had to have two or three systems. I went to the Suffs workshop in the summer of last year. The show is sung-through and there are so many characters. It’s a diction-heavy show, like an opera, so I wanted to make the theatre perform like an opera house. During The Visitor, Brian had five speakers in front and four more rows of delays. It was really nice to have strong SPL, but the timing was another issue. I wanted to get rid of that problem. Could I do something else?”

A possible solution to the Newman’s challenges arrived in the form of L- ISA, the immersive sound system from L-Acoustics. “During the pandemic, I went to a L-ISA demo at a small studio in London, but I didn’t think it could work in live theatre,” Kil says. Then she attended a demo at college in Queens run by Cody Spencer, a longtime associate of Ronan, who frequently uses L- Acoustics gear in his Broadway designs. (See this month’s bonus feature on Funny Girl.) “I did blind listening, and, for me, L-Acoustics sounded right,” Kil says. “Most sound systems are center, left, and right, so when you move the sound object, you only hear the speaker closest to you. I don’t really like the quality of that sound image. The L-Acoustics system uses lots of speakers, combining them in their processors, as the object moves around.”

Next, Kil says, “I went to South Korea, to visit family. The National Theatre there has L-ISA. The engineer allowed me to listen to it, and I noted that every seat has the same experience.

I brought it up to [Zach Ivans, a freelance L-ISA programmer who programmed L-ISA for Suffs] and he arranged some demos via Scott Sugden and Marcus Ross of L- Acoustics.”

The plan to use the L-ISA system got more complicated thanks to the much-discussed equipment shortage of 2022. The New York theatre was undergoing a massive restart and gear was sailing off the shelves of every supply house. “The Public works with Masque Sound, so, three months early, we reserved all the L- Acoustics gear they had. But they only had small-size fill speakers, and we had to get main speakers and processors from L-Acoustics,” Kil says. “The bigger problem was, L-Acoustics wanted to give me line arrays—three for each of five settings—but they didn’t have those demo speakers. I ended up with point source units, which made it hard to have even coverage. Also, I was really new to this system,” so she had a learning curve to navigate.

To compensate for the point sources’ performance, Kil says, “I bumped up everything, going as loud as possible. The orchestra had lots of head room, but our tiny microphones had feedback if I turned the system up too much.” Among other challenges, she adds, “We found problems with low-frequency buildup, because we had so many speakers close together. I used lots of EQ for the vocal to get rid of the low-frequency buildup and to cover the audience from left to right even in any seat.” She admits to having a bit of trouble delivering coverage to the back two rows. “If it were a traditional sound system, I could set up another delay line. But with the immersive system, I had to compromise with speaker positions.” Still, she kept at it, working the system and keeping an open dialogue going with Taub and director Leigh Silverman, who were, she notes, happy with the sonic result.

One feature of the L-ISA system proved especially helpful. “The software has a map that let me position the actors’ DPA 4061 mics,” allowing their voices to be positioned correctly in the sound image. As Kil notes, a similar approach is employed in the Broadway musical MJ, using d&b audiotechnik’s Soundscape; on Broadway, however, a Zactrack tracking system is used to keep tabs on the actors’ positions. Lacking Zactrack, she says, “We programmed all the mics and the A1 had to manually fire a couple of hundred cues while he was mixing this complicated, operatic musical. I don’t know how he did it. Such a talented young man.”

Running the numbers, the loudspeaker rig included two L-ISA processors; a main system of five L- Acoustics X12s, two KS21 subs, seven 5XTs for front fill, five 108Ps for spatial fill, 13 additional 108ps for the surround system (nine on the sides and four overhead), five LA4 amps, and, for foldback, two Meyer Sound UPJuniors and 14 UPM-1Ps. Control was by a DiGiCo SD10T console with two SD Racks, an Optocore DDFMR- 4X MADI interface, and an RME MADI bridge. (Without DiGiCo’s T software, Kil says, “I wouldn’t have been able to achieve the sound of this show.”) Sound effects were played back using QLab.

The actors’ DPA mics were connected to Sennheiser SK 5212 transmitters and EM 3532 receivers. Kil also notes that mic placement was a drawn-out process, as supply chain issues slowed the delivery of costumes, leaving it unclear who would be wearing a hat during techs.

The rest of the mic complement included DPA 4099s on violins, viola, cello, and contrabass; Neumann KM 184s on acoustic guitars, ukulele, and banjo; a Kemper DI box with Avalon U5 DI on the electric guitar; another Avalon U5 on the electric bass; two more KM 184s for flutes; and two Neumann TLM 102s for woodwinds and trumpet. Drums and percussion were covered with an Audix D6, i5, Neumann KM 184, and Shure Beta 91 and 98. The musicians were on an Aviom personal mixing system with two Genelec 8010 speakers for musical director Andrea Grody. Comms were handled by Clear-Com HelixNet and FreeSpeak systems.

Orchestra placement was also a challenge, thanks to pandemic restrictions that mandate that musicians be seated 6' apart. “For The Visitor,” she says, “we had to empty out LuEsther Hall [the theatre above two floors of the Newman] and put the orchestra there. For Suffs, we had reduced restrictions but still had to keep the musicians 6' apart. We built an area on stage left on the second level, using thick acoustic foam— even between the horn and violin.”

Grody, who was closer to the stage, directing the cast, “sat in front of three cameras. When she turned her head to the left, for example, she was looking at the strings.”

Despite everything, the sound design of Suffs came through clearly; theatre designers, it seems are crafty folk, learning to deal with COVID, product shortages, and supply chain problems in addition to the usual rigors of putting on shows in their premiere productions. Meanwhile, Shaina Taub is a busy woman. This summer sees the Chicago tryout of The Devil Wears Prada with her lyrics to Elton John’s music. In August, she opens her musical version of As You Like It in Central Park’s Delacorte Theater. The sound designer is none other than Sun Hee Kil.